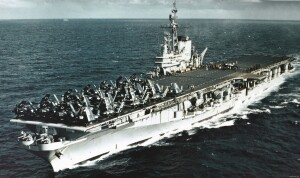 Edward was born in Winsted on July 25, 1928, son of the late George A. and Blanche A. (Kucinski) Regner. The son and grandson of farmers, he considered following in the family tradition, but ultimately enlisted in the U.S. Navy, where he was trained as an Aviation Electronics Technician and served on the U.S.S. Midway, VC-12/VAW-12 during the Korean Conflict.

Following his military service, Edward worked at a television repair shop, where a coworker introduced him to Katherine Dubiel. Katherine and Edward wed on August 8, 1953, and enjoyed 68 years of marriage before her passing in 2021.

In 1952, Edward enrolled at the University of Connecticut School of Engineering. After graduating in 1956, Edward worked as an electrical engineer at General Time in Thomaston and at Lewis Engineering in Naugatuck, until his retirement in 1993.

Throughout his 37-year career in technology, Edward tirelessly devoted himself to agricultural pursuits in his spare time, producing countless bushels of fruits and vegetables and many gallons of honey and maple syrup. He raised and sold pansies, vegetable plants and annuals, and was a yearly exhibitor of produce at the Goshen and Harwinton fairs. He was fascinated by seeds and seed germination.

His other hobbies through the years included home movies, coin and stamp collecting, wildlife photography, building and flying model airplanes, winemaking, and fishing. Edward developed an interest in running at age 40, eventually becoming an avid runner well-known in the Connecticut running community, participating in 5K and 10K races throughout the state almost weekly until the age of 90.

Edward was a committed blood donor, with over 20 gallons donated during the course of his life.

He was deeply devoted to his wife and a wonderful father and grandfather. His humor, charm and storytelling will be sorely missed. His resourcefulness, determination, curiosity, and ingenuity remain an inspiration to everyone he knew.

Funeral services will be held Tuesday, September 13, 2022, at 10:30a.m. at Gleeson-Ryan Funeral Home, 258 Prospect St., Torrington. Burial with Full Military Honors will follow in St. Peter’s Cemetery, Torrington. Friends may call Tuesday morning from 9:00a.m. until the time of service.

Memorial contributions may be made to The American Red Cross (redcross.org/donate).

To send flowers to the family or plant a tree in memory of Edward G. Regner, Sr., please visit our floral store.

A Memorial Tree was planted for Edward

Join in honoring their life - plant a memorial tree